Got (Plant-Based) Milk? How Uproot is Introducing College Students to Non-Dairy Options

Both Kevin Eve and Jacob Conway know the pains of giving up dairy milk.

Eve, a Brown University alumnus, grew up with a milk allergy and as a result, drank rice milk for the majority of his life. Conway, who gave up dairy when he started college at Southern Methodist University, would regularly have to go up to the counter at the food hall to get a carton of soy milk.

Now, the two are ready to make dairy milk alternatives more convenient and accessible in the real world.

The five different milks include almond, coconut, oat, soy and chocolate pea. The formulations are health concious — the almond milk variety has 50% more almonds; the soy and pea formulas both have eight grams of protein and the chocolate pea variety has no flavorings.

The other main aspect of the company is distribution. Uproot has developed its own dispensers, which it installs in college dining halls and other facilities in order to make their milk available to the public.

“Right now, food services are all using either half gallon cartons, which are wasteful, super messy and require a lot of restocking, or they have a Silk branded dispenser, which only offers one variety — typically soy or almond,” Conway told Rhode Island Inno. “But obviously, the plant milk market has grown beyond the bounds of soy and almond. Now, there’s coconut, pea and hemp and flax, so we wanted to be able to provide the volume that the market is demanding and the variety the market is demanding in facilities where they’re serving it the most.”

At first, Eve and Conway were thinking about trying to create a dispenser for at-home use, but they soon realized the demand might not be there.

Then the duo considered going straight to retail, but with all of the other brands already in the grocery store, they saw the greatest need not being met in public, high volume places that see a lot of people and serve a lot of food.

And the company appears to have found a pain point.

They piloted their first dispensers in dining facilities at Brown and Johnson and Wales Universities, and saw strong indicators.

“We were testing this theory that once you bring plant milk out of the confines of either a mini fridge or where it’s hidden in a corner, and in front of the students where they get their dairy milk and their juice and their soda, will they make that switch?” said Conway. “And that’s what we want people to do. We want people to be educated about their switch from dairy to plant milk, knowing that it’s a more sustainable option and that there are healthy plant varieties out there that can pack a bunch of protein without a ton of added sugar.” 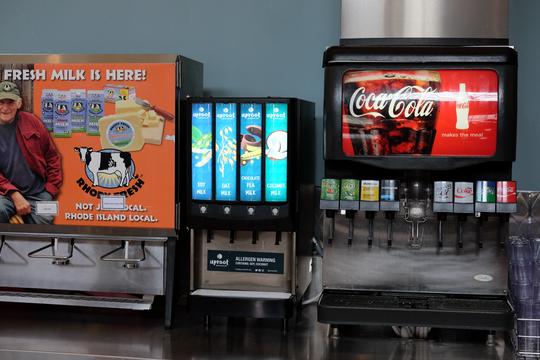 The huge demand from the pilot also told Eve and Conway that they had to stop making the milk by hand and automate the process. So, they moved out of the Hope & Main Kitchen in Warren and started using a co-packer to make the milk. They also have a manufacturer for the dispensers.

The advantages of this are many.

Dining facilities will be able to have four different milk options in one dispenser, and one gallon of concentrate translates into three gallons of dispensed milk, saving storage space in facility fridges. There are also positive environmental benefits from reducing packaging waste to saving on transportation emissions.

With their products nearly ready to go, Uproot is preparing for a product launch they hope to scale quickly.

In January, the company is planning to unveil its first batch of dispensers in at least 10 schools in the New England area. In the fall of 2020, Conway said Uproot hopes to launch its concentrate dispenser. The overall goal for 2020 is to have at least 50 different dispensers installed at various schools.

“Our mission is to fill the gap in the plant milk market that exists between retail and food services,” said Conway. “Really, we see an opportunity anywhere in any facility that is serving large volumes of creamer or dairy milk. Even if you already have a plant-based option, we think we’re a better one.”