Grounded Foods: “Do you Realise What You’ve Done? This Could be Huge”

For most of our readers, this vegan cheese brand needs little introduction. When Grounded launched online pre-sales for products that were not even yet made, they sold out in 3 minutes. This week, they closed an oversubscribed seed round led by Stray Dog Capital. We always said that these guys were going to be big. So, with no further ado….

Introduce Grounded please for anyone who may not know (yet!)
We make cheeses for people who are seeking a healthier, more sustainable alternative to dairy–at least some of the time. Our products are made from fermented cauliflower and hemp seeds–which give them this naturally cheesy flavour and rich, creamy texture.

Because we base our products on those ingredients, we’re able to create cheeses that are not only vegan-friendly, but also free from nuts and other major allergens. More importantly, non-vegan people like eating them.

Why cauliflower? Tell us about the upcycling and why your products can be so cost-effective.
SHAUN: When I first set out to make a plant based cheese, cauliflower just seemed like an obvious choice. I’d tried other ‘vegan cheeses’ in the past and noticed that they were all made in a similar way, using similar ingredients. So if I was going to create something that tasted different, I’d have to come up with a completely new approach.

As a chef, your focus is on making the most delicious food using whatever ingredients are available. But if you’re scaling that into a consumer product, you’ve got other considerations to factor in, like supply chain, seasonality, accessibility etc. I’d tried making nut-based cheese in the past but the cost was really prohibitive to do at scale, and there’s major environmental and social issues associated with nut production.

So I started experimenting with all sorts of veggies, including potato, but cauliflower came out the winner. Then I realised that I could use up the leaves of the cauliflower, and the ‘imperfect’ ones that usually go to waste. So it all grew from there.

I ended up with these recipes that were much more environmentally resilient, and far lower cost to manufacture. So now we have a real chance to compete with dairy in the longer term.

Shaun = tell us a little about your background! How did it come about that you, a fine dining chef, accidentally created this portfolio? Do you miss the restaurant industry?
SHAUN: I’ve been cooking for 20 years. I never got into it for the love of food though. What draws me to cooking is the science and the creativity behind it all. I like to present ingredients in a way that people don’t expect, and find ways to engage all the senses, not just taste alone.

The first plant based cheese I made, a ‘Roquefort’ style, was in our home kitchen in Melbourne. I’ve always been really interested in fermentation and exploring traditional techniques using non-traditional ingredients, so this time around I applied it to cheesemaking. Veronica didn’t notice that it wasn’t real cheese and ended up eating all my samples in the fridge. I didn’t tell her at the time. Instead, I made more and took it into my restaurant to test it on more people. 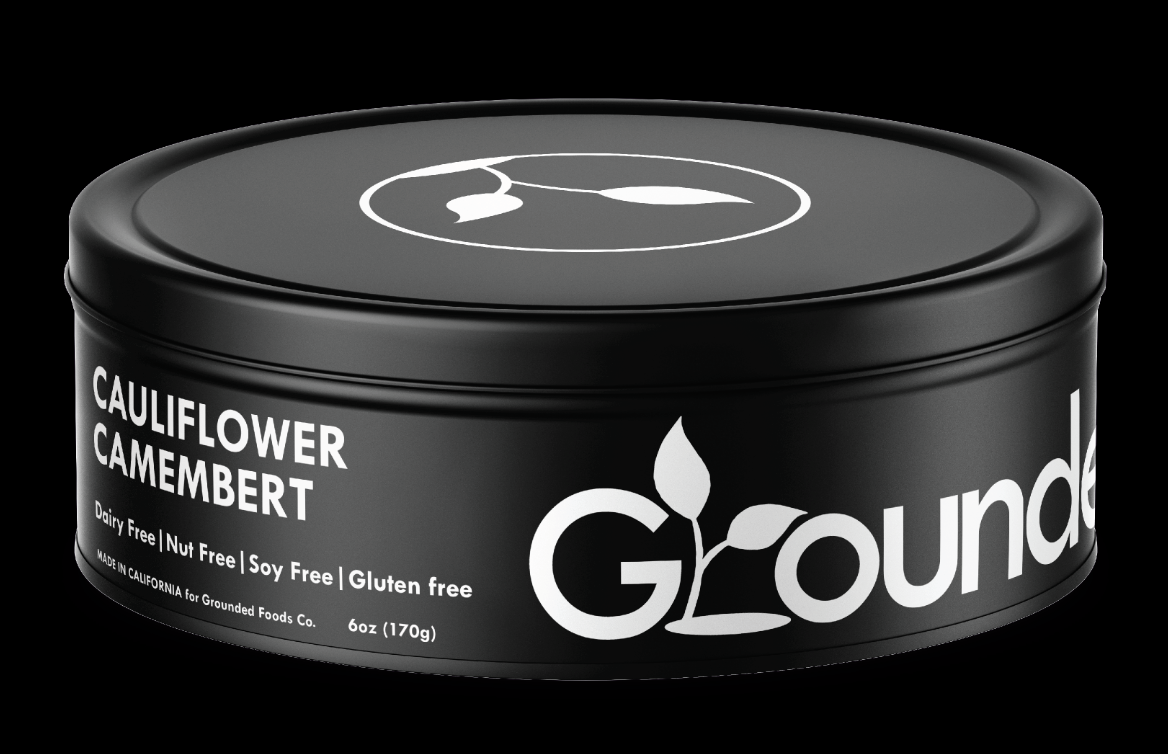 Nobody asked if it was real cheese, they just assumed it was some kind of rare variety from a small local farm or something. When Veronica found out what the cheese was really made of, she was like “Do you realise what you’ve done? This could be huge.” I didn’t even realise there was a market for vegan cheese at the time.

Once I started learning more about the other vegan cheese products there, I realised that they typically fall into two camps: the premium nut-based varieties (which are problematic to use in a restaurant, and super expensive to make), and the mass produced stuff based on coconut oil, starch and artificial flavours. So I became obsessed with finding a new way of making it. Instead of just making something that looked the part, I wanted to recreate the entire sensory experience of eating cheese, but using plants as the base.

I definitely don’t miss the restaurant industry. It’s a very tough lifestyle. The reason I was drawn to that career in the first place was because I love experimenting with food and developing new ways of doing things. I enjoy the perfection of it all, and obsessing over a technique until I’ve mastered it. These days I’m still satisfying that creative need, it’s just in a format that I hope will make a much more meaningful contribution.

Veronica – your background also gave you a special insight. Tell us how you knew you needed to leave the restaurant industry and create a plant based company
VERONICA: I love food. I love restaurants. But my background is in economics, not hospitality–and when I first met Shaun, I was a bit taken aback by how the restaurant industry was operating in Australia at the time. It seemed completely unsustainable; staff working excessive hours, chefs burning out from stress, thin margins…the vulnerability of the entire business model made me really uncomfortable. 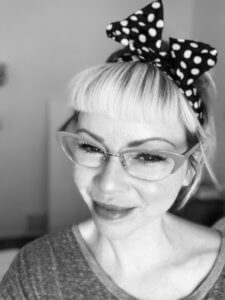 At the same time, I was looking at overseas trends. While Australia’s fine dining scene was having a moment, things were becoming increasingly casualised in the USA. Stuffy fine dining had had its day, and the next generation of consumers were far more interested in quick service and convenience. Things were shifting and we needed to move with that.

Ultimately, I couldn’t shake this deep suspicion that the restaurant industry was about to crash. It felt imminent. So we made the decision to leave the restaurant entirely–and dedicate 100% of our time to building Grounded Foods Co.

We could’ve created any kind of product I guess–but going plant based made the most sense. Given the monumental ethical and environmental issues created by animal agriculture, we wanted our business to be part of the solution. Not contributing to the problem.

It also made sense because Shaun and I have very complementary skill sets: he’s got this incredible, unique ability when it comes to food innovation, and I’m there to make that scalable and build a business model around it.

Your recent investment round has a bit of a story! Tell us how it all came about in a whirlwind of Australia to NY to LA!
VERONICA: We’d been testing out our cheeses in restaurants for about a year before we decided that we had a viable business. It was in August last year, when we got a kickstart from the Mars Seeds of Change Accelerator, that the business became official.

A few weeks into that program, I met Andrew Ive [Managing General Partner at Big Idea Ventures] at a conference. He believed in what we were doing, recognised our potential, and encouraged us to join his program in New York to fast track the commercialisation of our products. It was a no brainer; we packed up our house, bundled up our poodle, and moved to NY within a week.

We had rapid traction once people started tasting the products. So we were pretty confident when we announced our fundraising efforts in early March…literally an hour before Wall St crashed. Things got uncomfortable. Then they got scary. The world started shutting down, all the restaurants closed, the toilet paper vanished and everyone was freaking out. And there we were locked in a tiny one bedroom apartment in this foreign place, the epicentre of US covid cases. We’d already spent our entire life savings to get there, and if this business didn’t work, we wouldn’t even have anything left in Australia to return to.

We figured that this was our opportunity to keep moving the business forward while everyone else stood still. So we fled to LA, went into isolation and kept working (Shaun furiously making cheese, me rocking the fundraising). There were a few hairy moments during peak pandemic where the conversations with investors slowed down and we started to sweat. But we didn’t come this far to just give up when things got difficult.

I think that’s what caught the eye of investors at the end of the day. They just saw that we weren’t going to stop. I’m a firm believer that you can only fail once you stop trying.

And what about the terms of investment?!
VERONICA: We partnered with impact investors because we strongly believe that plant based food is the way forward. Shaun and I don’t consider ourselves to be vegan, but we made a commitment from day one that our company would never use animal products. So much so, that it’s reflected in our investment terms.

I’m sure some investors will find that too limiting or think that we should keep ourselves open to using animal products in the future. But I struggle to imagine a situation in which that would ever align with the values of our brand.

How do you see the current situation for startups trying to fundraising during a global pandemic?
VERONICA: I’ve been adamant throughout the crisis that food startups will be okay–so long as they’re thinking ahead. We were able to pivot really fast when the environment around us started changing, and just accepted the fact that anything could happen next. But that’s much easier to say when you’re a team of two, and don’t have the overheads that a more established startup has.

If the recent news is anything to go by, I think we’re about to see an explosion of investment into this space. It’s already happening. It’s incredible to watch the world, and our attitudes toward the existing food system, change so rapidly and so dramatically.

How do you perceive the investment situation as a whole at the moment when comparing plantbased and conventional?
VERONICA: A lot of investors will be on pause, waiting to see how things pan out. But the fact is that there’s still a great deal of VC money out there, from funds that are yet to deploy their capital. And regardless of whether they’re mission-based investors or more conventional, they’ll continue to look for promising opportunities.

Plant based will be an increasing focus moving forward. But more generally, I think investment will shift towards companies that are finding solutions to support a more environmentally resilient, and healthier, future–from food and fashion, to tech and healthcare.