Lovers of dairy-free and kosher desserts have a new health-conscious option in East Atlanta Village. Tucked into the narrow halls of the Global Grub Collective is Revolution Gelato, a small Atlanta operation run by Jewish siblings Jared Olkin and Leah Sitkin. 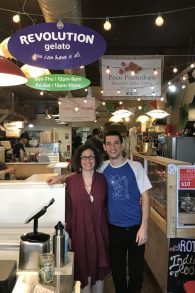 Embracing his Jewish heritage by making the desserts kosher and a healthier lifestyle by making them cruelty- and dairy-free, Olkin began by testing flavors in his kitchen. His use of alternatives such as cashew milk and inspiration from the exotic spices of Israel after a trip there helped his passion for healthier and more flavorful desserts emerge.

Once a carnivore, Olkin gained a love for vegetables and more nutritious food on that trip, which also influenced his palette. Using a newfound appreciation for healthier ingredients and a knowledge of ice cream from his mother’s creamery when he was growing up, he began churning out flavors at Revolution Gelato.

Olkin later recruited sister Leah, and the retail store in East Atlanta Village was born. Perfect 10 Foods, which distributes King of Pops, also jumped on board, and now Revolution flavors can be found in Sevananda, Whole Foods and others.

Revolution’s mission of being good for you and better for the planet remains. All serving materials are plant-based. The ingredients are largely organic and locally sourced, and Revolution still is competitively priced.

“We’re a mission-based business, and that higher purpose guides every decision we make,” Olkin said. “That goes for everything, from ingredients and nonprofit partners to growth goals.”

New things are on the horizon for Revolution Gelato. Favorites such as chocolate and cardamom are staying on the menu, but Olkin and Sitkin are adding flavors to the lineup. Seasonal offerings like beer gelato, created through partnerships with local breweries, locally made toppings and shakes also are in the future.

The company’s presence at festivals and other events also is growing, and the gelato shop last fall won the award for best dessert from Taste of Atlanta.

Revolution’s owners hope their message of plant-based, healthy and local products resonates with the community. “What could be more quintessentially Jewish,” Olkin said, “than trying to solve big societal problems with delicious food?”